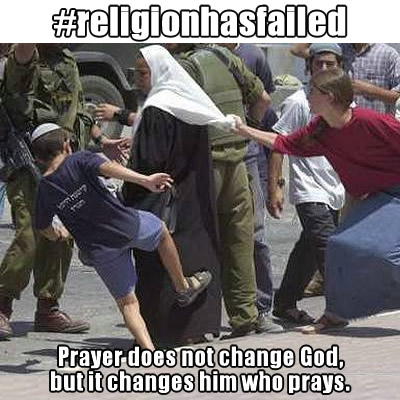 One of my major criticisms about religion is the fact that after many thousands of years of reinventing itself we still have war, poverty, and slavery.

Albeit in varying forms these problems still haunt humanity in a variety of disguises some apparent and some so subtle that we accept it normally. But religion claims to provide shelter and wisdom to protect humanity from pagan barbarism even from within itself.

My charge is that religion has failed it’s purpose to bring humanity it’s promised enlightenment and due to its ineffective management of it’s representatives it is now and historically causes more harm than it tries to compensate for with charitable actions. This incarnation of monotheism has had over 2000 years and still cannot reconcile interpretations among it’s own practitioners.

Further, that due to this irreconcilability it propagates a separatist mentality to control and manipulate numbers of the populace under an elitist oligarchical system. Religion’s inclusionary nature drives people further apart by bringing them together and at the same time teaching exclusionary thinking within the group. This thinking can and should be expanded to include all sports fans, Applestore “Geniuses”, and comic-con cosplayers.

We can no longer afford to engage with mythical figures to influence our actions or sanctify our achievements. We can no longer use these philosophical differences as an excuse not to change ourselves. We can no longer let traditional power structures hold this world hostage for private agendas that waste our time and resources.

We are Humanity and we deserve better.

Love your fellow man
follow this guy as Lord
just remember donations
are accepted at the door.

The evidence they say
only faith is required
but the morality they claim
we’ve already acquired.

For thousands of years
they say we are blessed
but after all this time
it’s a bloody, bloody mess.

It takes no god
to make murder bad
ask any child
who has lost their Dad.

1 thought on “Your Religion Has Failed Us”