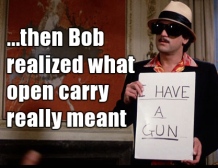 Hey, are you clinging to your gun and bible respectively yet.

Well, if you aren’t then you should probably get one of each and start parading around town displaying both for all to see. And of course the bigger the better.

Such is the current trend of “protesting” by folks who take carrying a picture of a gun to the next degree by using a real firearm that is usually loaded (what would be the use of an unloaded gun). These people seem to be under the impression that the rest of us are unaware of the US Constitution’s second amendment and as well as their ability to read.

In this video,  I was impressed by his solution of philosophically approaching the problem in a logical emotionally detached argument that illustrates a justifiable course of action when faced with a situation of increased danger.

The law may protect the open carry of firearms but just as businesses have the right to refuse service for no shoes or shirts the same principle should be applied here when weapons are allowed into the establishment. By not doing this however the business owner is advocating an environment of increased danger in which they are expecting their paying patrons accept?

Don’t business owners have the obligation to keep their patrons safe? Should we as patrons expect to have a safe environment? Some have been doing that but owners who seek to place their business into a political debate risk their bottom line.

David Walman of thedailykos focuses the issue as form of brand hijacking of the business for the political agenda of gun rights activists. That’s really not a bad strategy and someone needs to take note and start using for good instead.

So what’s a conclusion to all this…

Not bragging but I have several high caliber weapons and I practice regularly to keep up the skill. Not to protect myself from the hoards of liberals, or terrorists, or imaginary monkeys from outer space. I practice because I was taught to hunt with a gun as a survival skill and if needed I have it. I plan to pass that skill on to my son with the same knowledge of responsibility taught to me.

By extension, I don’t feel the need to practice shooting in public spaces. I keep my gun in the car until I reach the shooting range, then carefully unpack and load the weapon. Check carefully my surroundings and use the assigned area for firing at targets.

Strangely enough I don’t go out to my front yard and start shooting cans off my neighbors van and claim it as my second amendment right.

Mainly because one errant shot or misfire can cause severe injury or even death to one of my neighbors or their children. I may be a crackerjack shot when comes to shooting but I realize accidents can happen. I’m just rational that way.

And further because I prefer my neighbors to feel at ease and trust me. If I start waving my guns around someone is going to get the wrong idea and there could be a confrontation that causes severe or deadly consequences. I’m just paranoid that way.

So gun activists are doing something similar when they walk into public spaces like restaurants carrying long guns and assault rifles. Can they believe they are making a statement when the interpretation of their motivations is subjective to all those around them. I don’t know who this person is but I know they have a gun and I know what guns can do.
Such a weapon in and of itself is intimidating. That’s it’s purpose as a tool of destruction even if used for peaceful reasons it’s function is to injure or kill.

So for gun rights activists to claim peaceful symbolism by openly carrying such a threatening object into public spaces seems hypocritical and ignorant to concept of safety. If the claim is people are just uncomfortable at first “interacting” with a high powered weapon in public but then accept it’s presence so it becomes like a traveling gun show encounter group. That’s is the intimidation I’m talking about because you have a place for gun shows and people have the freedom to participate or not. Taking that choice away infringes OUR freedom whether we submit to it or not. Sure I’m going to listen to your story about custom boring the barrel because telling you that you area dumbass for bringing it next to my child may cause you to demonstrate the accuracy of your custom bored barrel in my direction.

Should we desensitize ourselves of the spectre of the gun so it becomes common place? Isn’t that going backwards? Hasn’t humanity paid enough blood to the god of war that it must steal our future by creating a world where our “might makes right”? This seems to tread into the ground of sanctioned thuggery under the pretense of freedom but isn’t it the same old game of intimidation for the sake of self righteousness.

Can’t we all just get along?